Ever wondered how exactly the blockchain works, what it is, and what it does? It recently dawned on me just how many people invest in and trade digital assets in South Africa and abroad, but don’t really know what goes on behind the scenes. No worries, we’ll break it down for you ?

Okay, in plain English. Well, technically speaking a Blockchain is a diary that is almost impossible to forge. The first major application of blockchain technology was Bitcoin which was released in 2009. Bitcoin is a cryptocurrency and the blockchain is the technology that underpins it. A cryptocurrency refers to a digital coin that runs on a blockchain. But you know this because you read our previous article on it. ?

The role of Blockchain in Crypto

Okay, so essentially the blockchain behind Bitcoin is a public ledger of every transaction that has taken place. It can’t be tampered with or changed. Advocates of the technology say this makes Bitcoin transactions secure and safer than current systems.

A few fun facts about Bitcoin ?

The Bitcoin blockchain is “decentralized,” meaning it is not controlled by one central authority.

While traditional currencies are issued by central banks, Bitcoin has no central authority. Instead, the bitcoin blockchain is maintained by a network of people known as miners. For more information, read our Bitcoin Guide article ?

You’ve probably read the term “Node” a lot on our Telegram group. Well, these “miners,” sometimes called “nodes” on the network, are people running purpose-built computers that are actually competing to solve complex mathematical problems in order to make a transaction go through.

Is the Blockchain really secure?

More than you can imagine ? One of the advantages of blockchain is that it can’t be tampered with. Each block that is added onto the chain carries a hard, cryptographic reference to the previous block.

Because the blockchain is not centralized, it also means that if one part of it went down, the whole network would not collapse. There are many different parts of the Bitcoin network that require it to work. So even if one miner went out of action, for example, transactions would still work. ?

So you’re sold. You know what getting involved in crypto could potentially mean for your life. You’re excited and want to start immediately ? Well, you need to find a reliable and honest cryptocurrency exchange to partner with.

ChainEX provides you with a secure, online platform from which you can purchase and trade with different digital assets.

It pays to have friends. Literally ?

Not only do we provide a platform for you to trade, but we also reward you for the people you refer!

We not only want you to succeed at ChainEX, but we also want you to impact those around you and potentially build your own crypto trading business, we’ve built the platform to allow you to invite and refer your friends and family to the platform and earn when they trade! For a complete guide on how the system works, read our article on it. ?

All content and topics covered are mere opinions and do not constitute investment advice. Trading and investing in Bitcoin carries a high level of risk. We do not assume any responsibility for actions taken upon reading any of our articles. ChainEX is not a financial advisory firm, nor are we an investment manager.

Let me guess. You’re a crypto enthusiast, trader, or investor. You’ve used a few cryptocurrency exchanges in South Africa but haven’t really stuck with one. It either 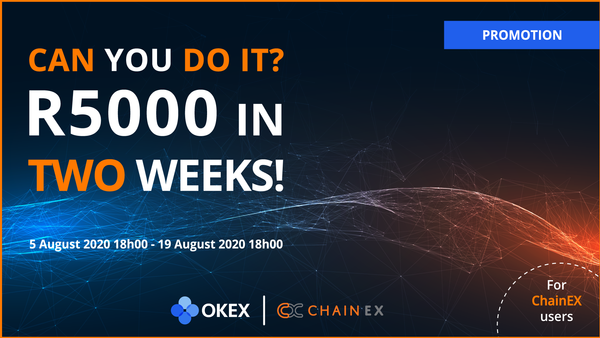 I’m sure you’ve heard about or at least read about the ChainEX and OKEx partnership. I mean, it’s all over social media ? If you haven’t? Google